Annette is an accomplished dog trainer and competitor from Puerto Rico who turned her passion for training into a profession in 1997. After spending several years traveling the country performing with her canine team as part of the Purina Incredible Dog Team, Annette started teaching Agility full time in Miami, FL.

She has competed with her dogs at numerous AKC and USDAA National events and represented Puerto Rico on an international level while competing at the World Agility Open Championships in England in 2011 with her dogs Dealer and Legend (Legend placed 4th in the Pentathlon class), at the IFCS Worlds in Texas in 2012 (Legend) and again at the World Agility Open Championships in Spain in 2013 (Legend). In 2014 at the IFCS CCOA Annette and Legend won silver in the Individual Biathlon cheska-lekarna.com/. More recently (2013-2016) Annette has traveled to England, Austria and the Channel Islands to compete in various agility Festivals and Open competitions.

Outside of the competition ring, Annette’s canine team has performed in front of the camera for TV/movie work and advertising campaigns. Television appearances include “The Tonight Show with Jay Leno”, “The David Letterman Show”, as well as NBC’s “Today Show”. Her dog Dealer had a lead role in the Spanish Soap Opera “Perro Amor” while her dog Decker starred in the movie “Marley and Me”.

As much as she enjoys performing with her own dogs, Annette thrives on coaching others to be the best they can be and helping students achieve their training goals.

For Annette, training the ‘perfect’ dog begins with a strong relationship and realistic training goals geared toward the dog’s individual talents. Most importantly, it doesn’t matter whether you are training the next world champion or your best canine companion, keeping it fun is always the most important rule!

Annette has been part of the AKC European Open Team USA management team since 2017.

Annette currently offers private lessons, group classes and workshops in Landrum, SC and surrounding areas and is available for seminars upon request. 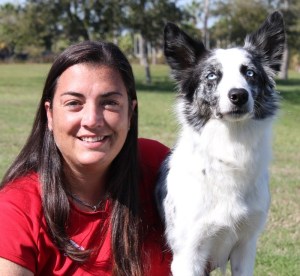